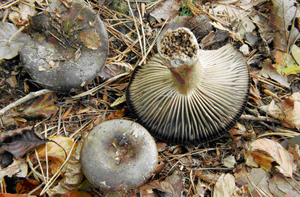 Of the six “blackening” Russulas listed in Nordic Macromycetes Vo.2 there are three superficially similar species, common in our area, which soon become suffused or completely blacken,very early in their development. Two of them are frequently encountered on our woodland
forays. They are Russula nigricans and Russula densifolia .

The other is Russula anthracina
which is much less common or is it that it has it been confused with the other two? They can
be separated on reliable contrasting characters and here is a simple dichotomous key to aid
the process.
It is assumed that the Genus Russula as a whole can be recognised by the mycologist.
1 Gills widely spaced and very brittle in mature specimens. = R.nigricans
1a Gills more crowded 2
2 Flesh and gills becoming pink when bruised ( 5-10 mins) = R. densifolia
2a Flesh and gills quickly becoming dark grey to black when bruised or cut
= R. anthracina

All three species are reported from a wide range of woodlands in Britain and are all rather stout
in stature. I have only found Russula albonigra once that I know of and it was trooping on a
woodland edge and associated with Scotts pine. Any feedback from use in the field would be
most welcome.

Theme by Anders Noren — Up ↑